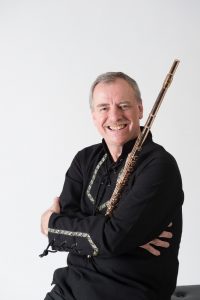 Born in 1961 in Hungary. Graduated from Franz Liszt Academy of Music in Budapest in 1984. He won many awards at international competitions (Ancona, Leipzig, Markneukirchen ). He was solo flutist of the Hungarian Radio Symphony Orchestra 1981-1991 and at the Hungarian National Philharmonic Orchestra 2000-2006. He was the founder and director of Doppler Flute Institute at Budapest. At the moment he is a professor at Musikhochschule of Detmold, Germany and guest professor at Karol Szymanowski Academy of Music in Katowice. As soloist he has performed in almost all European contries and also in the USA, Japan, Taiwan, Korea and Israel with partners like András Schiff, Martha Algerich, Miklós Perényi, Zoltán Kocsis, Auréle Nicolet. He has recorded over 30 CD-s with Hungaroton, Capriccio and Naxos. Every year, he conducts 10-12 master classes all over the world. In 2008 he was awarded the highest Hungarian recognition for musical performance, the Franz Liszt-prize by the Ministry of Culture and Education of Hungary.