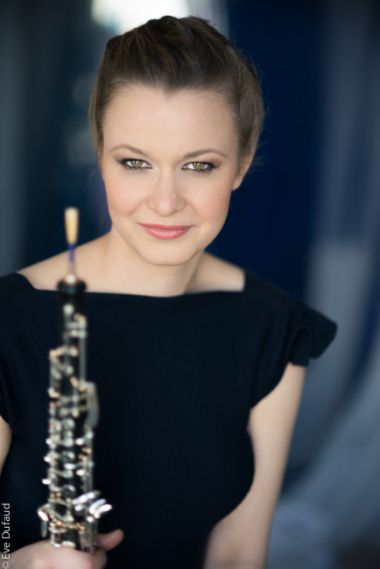 Steeped in the tradition of Czech musical lyricism, flexibility and spontaneity, Michaela Hrabánková is a versatile soloist and chamber music musician, passionate about standard repertoire as well as contemporary works. Born in Prague, she currently resides and works in Paris.

She gave recitals and chamber music concerts in many  festivals around the world. In France (Festival de la Chaise-Dieu Festival, Festival of Hector Berlioz, European Meeting of Double Reeds),in Germany (Rheingau Musik Festival), in Kosovo, in the Czech Republic, in Romania ( Festival of young talents), in Algeria, Brazil or in Argentina (Encuentro Oboistas Buenos Aires).

During three years she was a member of french wind quintette „ Le Concert Impromptu“, which is supported  by the Ministry of French Culture.

In 2001, Michaela Hrabankova won the 2nd prize of the Czech Radio Competition “Concertino Praga”. She was invited by the European Organisation of Music Competitions for Youth / EMCY / to perform on  a concert tour through the  Europe.

Michaela is regularly invited to give masterclasses in France, Romania (Gheorghe Dima Music Academy in Cluj-Napoca), or  in Czech Republic (Prague Academy of Music, Janáček Academy of Musical Arts in Brno, Prague Conservatory, the Conservatory of Pardubice). Since 2013 she is teaching at the conservatory Mstislaw Rostropovich in Maisons Laffitte.

She recorded a CD together with Le Concert Impromptu called „French Music“. In 2013 she recorded  for the Czech Radio “Český Rozhlas” Concerto for oboe and small orchestra by Jan Rybář (Dedicated to Michaela Hrabankova) and in 2017 CD “Divertissement” with the guitarist Gabriel Bianco for the recording company Ad Vitam records (distribution by Harmonia Mundi).

Her musical education started in Prague,  with the soloist of  National Theatre of Prague Josef Vacek, at the Prague Conservatory with Professor FXThuri. She Left Prague to continue studies in Germany at the Hochschule für Musik in Karlsruhe, with Professor Thomas Indermuhle. She completed her education with  Erasmus exchange programme in the class of Jacques Tys at the Paris Conservatory CNSM. From 2007 to 2010 She Got a scholarship of the “Alvaro Gomez Music Foundation”.  She is supported by producer instruments “F.Lorée” and producer reeds the oboe and English horn “Koje Reeds.”